"Something's Missing (In My Life)" 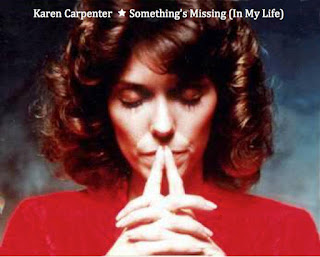 “Something’s Missing (In My Life)” – Written by Jay Asher and Paul Jabara, the song was recorded by Paul Jabara and Donna Summer and was included on his 1978 album “Keeping Time.” It also appeared on the 1980 soundtrack for the movie "Inside Moves" performed by Lady Sylvia. Paul Jabara also wrote or co-wrote the classic tunes “Last Dance” for Donna Summer, “Enough is Enough (No More Tears)” recorded by Donna Summer and Barbra Streisand, “The Main Event” a Streisand hit and “It’s Raining Men” by the Weather Girls. “Something’s Missing (In My Life)” was recorded by several people in 1979-1980 including Marcia Hines, the Europop group Patchwork and jazz musician Ahmad Jamal. Marcia Hines took the song to #9 in Australia in late 1979.

Here’s a little trivia on Paul Jabara he was in the 1978 film "Thank God It's Friday," he played the role of Carl, the lovelorn and nearsighted disco goer, and he also contributed as a singer on two tracks on the original soundtrack album.

Karen Carpenter fans especially love this song for it’s dark somber feeling and Karen’s use of her famed lower voice. Many have said this song should have ended up on Karen’s album and could have been a huge hit. This song particularly touches fans as there was much missing in Karen’s life and she communicated this very well in this song.

Songwriter, Jay Asher, has gone on record saying Karen Carpenter’s recording of the song is his favorite version.


"Something's Missing (In My Life)"

Something's Missing (In My Life) (Lyrics)

5:52 am..
I’m awake
and thinkin ’bout my life
5:53
I can see
I won’t sleep a wink tonight
6 am,
where’s my pen?
I might as well get up and write a song
And try to work out
why when everything seems right,
why do I feel so alone?

Got my house,
got my fancy car,
everything’s going like I planned so far,
But something’s not there,
that should be there
I gotta find it somewhere,

Since the day you left my side,
I’ve torn myself apart
and I still can’t decide,
Is it you I need
or did you really hurt my pride?

You’re what’s missing in my life,
aww come and be
right where I need you to be…..

If you have not yet purchased Karen's solo album it is well worth it... here's a link to purchase it at amazon. com: http://www.amazon.com/exec/obidos/ASIN/B008E00706/ref=nosim/populasongsmu-20
Posted by Unknown at 7:52 AM