Karen Carpenter: The Unreleased Solo Songs - I Do It For Your Love 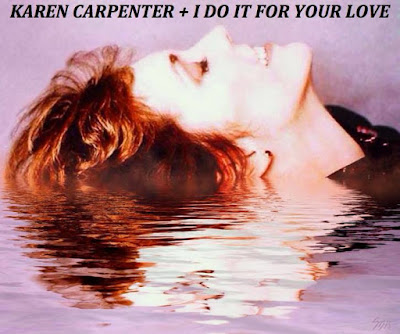 Hello my wonderful friends!!! I really hope you've been enjoying this series on Karen's unreleased song. It's been tons of fun putting it together for you!

Simon’s original recording of “I Do It For Your Love” is done in a fantastic story telling pop style with a hint of folk feel to it. Karen maintained that same sort of style including the folksy feel along with an extra-added New York City sheen to it as which for Phil Ramone was ever so famous. Simon's recording includes Bob James electric piano and Steve Gadd on drums , both of which play the same instruments on Karen Carpenter's recording. This was Karen's (and Phil Ramone's) way of paying tribute to the legend Paul Simon. By the way Phil also produced Simon's recording of the song.

“I Do It For Your Love” takes a somewhat cynical look at marriage and love. Karen does extremely well with these type of “story songs,” it’s a shame she didn’t have the opportunity to do more. She could have hit the ball out of the park with a song such as “Cat’s In The Cradle,” with a few lyrical changes possibly.

The following is an essay I found on the internet written about the song “I Do It For Your Love”. It is written in the male point of view as the song was written by Paul Simon though if we want to think of Karen Carpenter as the narrator we can change the “man” to “woman” and the “he to “she.”

Here, we find a man musing on his wedding day and early living arrangements with his bride. Aside from the lousy weather, the ceremony was less than romantic, and possibly presided over by a justice rather than a clergyman: "We signed the papers and we drove away." Then their apartment was moldy and leaky. Then they both got sick and, not being able to afford medicine, simply "drank... orange juice," hoping that mega-doses of vitamin C would do the trick.

Even the rug the husband buys for his young wife-- a splurge, no doubt, even if it did come from a thrift store-- turned out to be a less-than-pretty addition to their abode, as they colors ran together before he could get it home. This luckless pair reminds one of the couple in O. Henry's "The Gift of the Magi."

And yet there is an affection for this time. Again and again comes the line "I do it for your love." It was OK. The sacrifices were worth it. Instead of saying "one day we'll look back at this and laugh," it seems that they were laughing at the time. Because, despite the lack of physical comforts, there was an emotional comfort. A sense that they as a couple, were building something together. Maybe out of noisy pipes and blurry rugs, but a home.

And then... the breakup. "Love... disappears." Wait, when did that happen? In the space of three lines, the relationship dissolves. What has withstood such an uninspired start and such wretched living conditions succumbs to "the sting of reason." One would think that living in a musky hovel would mean that the couple was dealing with reality and surviving despite it.

But no. The reality they get "stung" by is not physical. It is emotional. While living in a physical netherworld, they were emotionally dwelling in fantasyland. They are two "hemispheres." They can meet, but not merge.

The clue is in the color imagery. From "The leaves that are green turn to brown" to the all-black rainbow of "My Little Town," color has been an important metaphor for Simon, but perhaps never more so than in this song.

Even at the outset, the colors are wrong: "The sky was yellow and the grass was gray." Then, they both tried being the same color... by filling themselves to bursting with "orange." That didn't work.

So then we have "the colors ran/ the orange bled the blue." Now, the colors are intermingled, but in an unappealing way, resulting in what today we might call "co-dependency." Each one is relying on the other for his or her identity... and the "fabric" of their relationship is a mess.

Another interpretation of the rug-color imagery is the colors themselves. Orange is a sunny, hopeful color, while blue is the color of sadness (as in "the blues"). The orange person is making the blue one "bleed," in this case, or perhaps dilute his or her identity and sense of self.

Surely, a sad person would not mind losing his sadness and have it bled off by sunniness? Yet we know from experience that, if someone is baseline serious and somber, having a Pollyanna for a roommate could become oppressive in its own way.

The suddenness of their realization is felt in the word "sting," but also reflected in the abrupt change of imagery from concrete to abstract. Aside from the surreal colors of Nature on their wedding day, the first two verses and the bridge are full of bold, realistic images.

Then comes the last verse, with its abstractions ("reason" instead of "pipes" and "papers"), synecdoches ("tears" for "sadness"), and metaphors ("hemispheres" for "personality types"). Poetically, the frozen "north" is traditionally associated with seriousness and the sunny "south" with passion).

The uncomfortable reality of their "room" made them feel a sense of solidarity, as in the lyric, "You and me against the world." This misery kept them together, but also distracted them the real, tectonic problem of their whole planet. A couple should, after all, share more than a "cold."

So what is the "reason" for the "tears"? To paraphrase: "North is north, and south is south-- and never the twain shall marry."

Well, they might. But they might ultimately regret it and part ways. Still, even this painful parting is done out of care for the other. "I am not right for you," each says, "But, because I care for you, I want you to have the chance to find the one who is. Even leaving you is something I do... for your love."


I Do It For Your Love

I Do It For You Love (Lyrics)

If you have not yet purchased Karen's solo album it is well worth it... here's a link to purchase it at amazon. com: http://www.amazon.com/exec/obidos/ASIN/B008E00706/ref=nosim/populasongsmu-20
Posted by Unknown at 7:04 AM

Email ThisBlogThis!Share to TwitterShare to FacebookShare to Pinterest
Labels: I Do It For Your Love, Karen Carpenter, Karen Carpenter solo, Paul Simon, Phil Ramone, Steve Gadd, Stewart Marshall, Still Crazy After All These Years, unreleased songs